On a steep hill adjacent to the church and monastery of Agios Nektarios is located Aegina’s version of Mystras* – Paleachora**, which means literally, “Old Town”, and which was for a millennium (9th century – early 19th century AD) the island capital. The setting itself is magnificent, especially in spring, when all vegetation is a brilliant green both on the hill and in the valley below, seen in panoramic splendor from high above.

All that remains of this hill village with its castle are its churches, rumored to number 365 – one for every day of the year – though this figure is unsupported by research. Of the 70 churches whose existence on the hill are confirmed, 33 churches remain and are open to visitors. Five have been restored and are in good condition, though most remain in great need of restoration. They belong to the Byzantine Service under the Greek Ministry of Culture, which authorizes any projects carried out here. The nearby quarry has caused much damage to the churches with its ongoing use of explosives.

During the third Aegina Fistiki/ Pistachio Festival in 2011, a guided tour of Paleachora was offered by Xeni Petritou-Triantafillou, an artist born on the island, who continues to live and work here, and who published a fine book about Paleachora with her own photographs and paintings of the churches. Text and notes are in both Greek and English. (Παλιαχώρα, Η Μεσαιωνική Καστροπολιτεία της Αίγινας/ Paleochora, The Medieval Acropolis of Aegina, Perpinia Publications, Athens 2011). A native-born Aeginitian, this author spoke a little about each of the churches visited during the tour, her deep knowledge and love of Paleachora evident in her commentary. 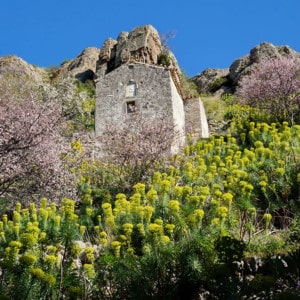 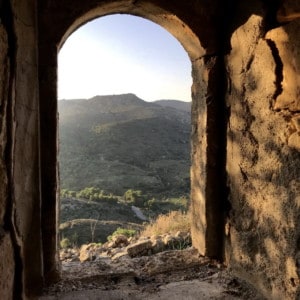 The churches are linked by winding stone paths known as kalderimia (a Turkish word), many of them flanked by stone walls, with pine trees here and there and stone steps leading to some. The houses of the inhabitants (estimated at more than 800), have tumbled into heaps of stones during the two centuries since the hill capital was abandoned following the end of the long Turkish occupation. Only then was it safe to return to the harbour, where soon the small city of Aegina would become the first capital of the new Greek nation (1826-28) during the War of Independence.

The churches which we visited were all beautiful, with frescoes in varying stages of deterioration, though some of them impressively intact, including those of Agios Georgios and Agios Dionisiou. The latter offers an amazing view both of the valley below and of the opposite hillside, with the sea visible off to the west. Above it is a monk’s cell, its ceiling lined with thin reeds (καλάμια/ kalamia) supported by rough wooden cross beams – like the ceilings found in many traditional village houses in Greece. Fine iconostases are also found in some of the churches, as in Metamorphosi, with one constructed of a light, honey-colored wood.

The church of the two Saints Anargyri (‘Αγιοι Ανάργυροι) boasts a fabulous view to the east of Aegina’s fantastic pine forest, and inside this church is a fresco that an English participant in the tour likened to a Hindu fresco, with a river in it. We saw many beautiful belfries during our walk, which we learned were rare during Ottoman times, as the Turks often destroyed them, Paleachora being an exception in this regard.

Meandering along these old stone paths amid these stone churches in the deep quiet of this wooded hillside, it is difficult to imagine the horrors endured by the inhabitants of Paleachora, mainly from pirate raids– this over the course of centuries. According to one Dr. Moutsopoulos, the settlement of Paleachora in (most likely) the 9th century AD followed upon a massive invasion of Attica and the Peloponnese by Saracen pirates, with Aeginitans fleeing the dangers of the harbour for the inland heights, which they then fortified.

The hill on which they built houses, churches, mills and a castle/ fortress was blessed with springs and small stone-lined reservoirs, like little ponds, known as souvales. The Mesagros valley below was also well-watered and fertile, providing the inhabitants with food, and the castle at the top of the hill afforded an extensive view of the Saronic Gulf, allowing forewarnings of pirate raids. The town itself was well-camouflaged due to its natural building materials, which blended with the landscape.

Between the 9th and 12th centuries, however, pirate raids were frequent, and many inhabitants of Paleachora were forced to join the pirates or flee the island. After the 4th Crusade in 1204, Aegina fell under Venetian rule, and in 1317, the island was given as a dowry to Alfonso Radrigo of Aragon upon his wedding with the daughter of Bonifaccio da Verona. Alfonso collaborated with the Turks, and together they attacked and pillaged the island, but by 1451, Aegina again fell under Venetian sovereignty, which lasted until 1537, when the notorious pirate, Barbarossa, admiral of the Turkish fleet, launched a four-day attack on the island, during which he occupied and razed Paleachora.

Barbarossa was born on the Greek island of Lesbos/ Mytilini, of a Turkish father – a Turkish feudal cavalry knight who was involved in the Ottoman capture of the island of Lesvos from the Genoese – and a Christian Greek mother, widow of an Orthodox priest. Not long after these ravages, a visitor to the hill found no one there, and only traces of the houses. Pirate raids continued after all this, though Paleachora was rebuilt. The Venetians engaged Morozini to crush the pirates, but his army then besieged Paleohora for eight days and took 600 of its inhabitants with them as slaves when they left. Thus Aegina again fell under Venetian rule in 1687.

A second period of Ottoman domination began in 1715, by which time the Aeginitans had a prosperous economy, impressing the Turkish tax collector with the wealth of its citizens. He was also impressed by Paleachora, with its strong fortress, its plentiful drinking water, vines, olive, lemon and bitter orange trees. But from about 1800 on, the residents of Paleohora began to leave and settle by the harbour, and by 1829, the depopulated town presented a sad spectacle to a contemporary observer.

Paleachora is one of Aegina’s most atmospheric places to visit, its lovely churches standing as the only monuments to a long and frightening history. One can only imagine that the beauty of this place must have been experienced in poignant counterpoint to the terror of ongoing pirate incursions, the Orthodox faith a comfort to the besieged occupants.

Every year, on the Monday following Easter Sunday (the following day, that is to say), a celebration known as Lambris is held in the grassy area next to the Holy Cross Church/ Stavros from midday into the afternoon, with traditional Greek music and dance (as well as souvlakia). This annual event is sponsored by a local cultural association known as the Morphotikos Syllogos Aeginas / Μορφωτικός Σύλλογος. It is free to the public.

Xeni Petritou-Triantafillou
Xeni Petritou-Triantafillou has published a very interesting book about Paleachora – The Medieval Acropolis of Aegina. The book is bilingual, in Greek & English and richly illustrated. It is divided in one part writing about the history of Paleachora and another part showing all the beautfiul paintings that Xeni has made of the churches of Paleachora. Her paintings have inspired her to make this book. The book is available at the local bookstores on Aegina for €20.

If you want to organise a guided tour to Paleachora you can contact her. She speaks Greek and English.