One of the most visited sites on Aegina is the church of Agios Nektarios (Saint Nectarios) and the monastery of Agia Triada (The Holy Trinity) that is located on a higher level overlooking the church. Agios Nektarios of Aegina (1846-1920), is one of the most widely known Greek Orthodox Saints. He was officially recognized as a saint by the Ecumenical Patriarchate of Constantinople in 1961. Yearly, thousands of people from all over the world coming to Aegina to visit the tomb of Agios Nektarios for healing reasons, to pray to him or ask for his blessings.

Agios Nektarios was known as a great miracle worker, particularly as a healer of every sort of disease, he was also a prolific writer, theologist, philosopher, moralist, educator, poet, ascetic and mystic. Above all Agios Nektarios was a man of deep prayer, and a hard worker who laboured just as everyone else around him, no work was ever dishonorable to him.

He was despised by many who mistook his popularity amongst the people as an attempt to become patriarch. As such he was relegated.

In 1904 at the request of several nuns, he established a monastery for women on Aegina named The Holy Trinity, where he lived for the rest of his life as a monk. He wrote, published, preached, and heard confessions from those who came from near and far to seek out his spiritual insights. In 1920 he died at the age of 74.

His memory is celebrated by many many people on the 9th of November, on the nameday of Nektarios. There are services in the church on the night before and there is a special procession in the morning, where the remains of Agios Nektarios are carried through the streets of Aegina town.

Visiting the church and monastery

Make sure your arms and legs are covered when you enter the buildings. Skirt are available at the entrance of the monastery and church. Entry free of charge.

You can visit the immense church that is still not totally finished. The mausoleum of Agios Nektarios is inside the church on the right side. After you visited the church you can climb the stairs to the monastery of the Holy Trinity, which I find the most interesting part of the complex. 14 Nuns are still living in the monastery. Recently, the monastery has been expanded with a huge guesthouse. The hill on which the monastery is built is named Xantos, from the word “xagnadema” (look out point), inviting you to survey the surrounding landscape. 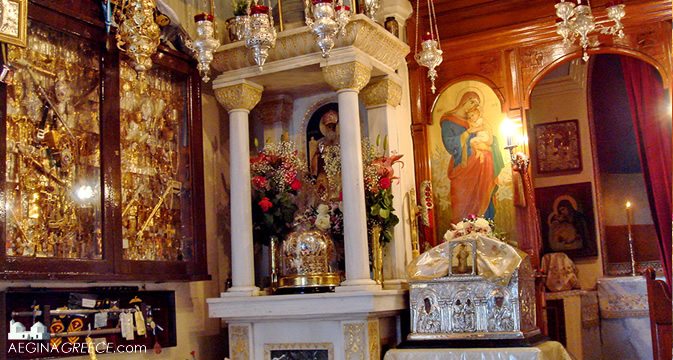 At the monastery area of The Holy Trinity you can visit 2 little chapels where you can see the old marble tomb where he was burried after he died. Many faithful can hear the Saint blessing them if they put their ear to the tomb and listen. In the left small chapel his remains are kept in a silver box. Behind the chapels you can visit the rooms where he used to live. Next to the chapels you can fill a bottle with holy Agios Nektarios water. There are also 2 shops where you can buy Agios Nektarios souvenirs, books, icons etc. Inside the shops you can ask for a small plastic bottle with oil and a small plastic bottle that you can fill with the holidy water. The oil and the bottles are free. 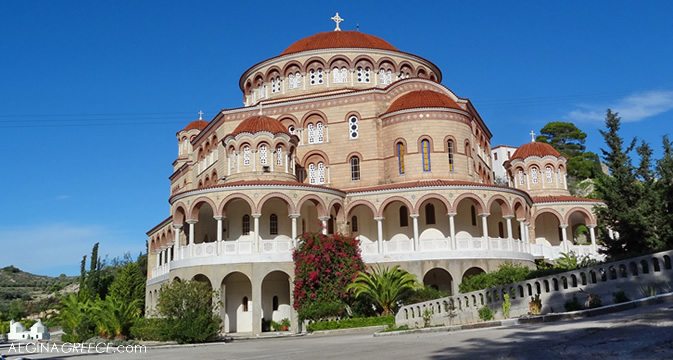 How to reach “Agios Nektarios”

The church can be reached by: 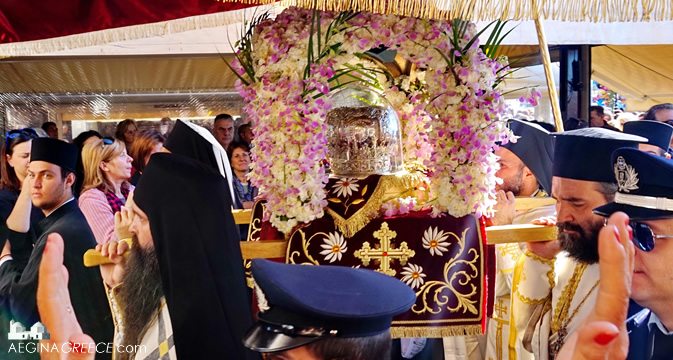 During the last days of his life, Agios Nektarios was in the room for the incurables of the hospital, among many poor patients who were at the point of death. Beside the bed of Agios Nektarios was a patient that had been paralyzed for years. As soon as Nektarios gave up his spirit, a nurse of the hospital, together with a nun who had accompanied him, began to prepare the holy body for transportation to Aegina for burial. They removed an old sweater from him and placed it for convenience on the bed of the paralytic and continued to prepare the body. Suddenly, the paralytic patient became well and rose from his bed, praising the Lord. This was the first miracle after the repose of Agios Nektarios.

There have been more than two thousand miracles attributed to the intervention of Agios Nektarios. 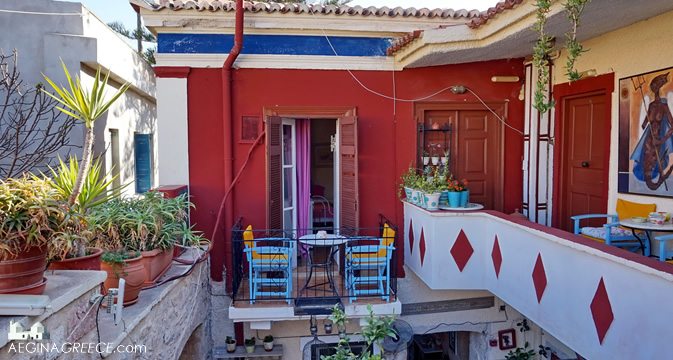 The room with the small balcony is the room where Agios (Saint) Nektarios used to stay when he still was an unknown monk, living in his monastery on the outskirts of Aegina. The Saint used to travel to Aegina town with his donkey for his food supplies and during the night he slept at the Aeginitiko Archontiko Hotel. 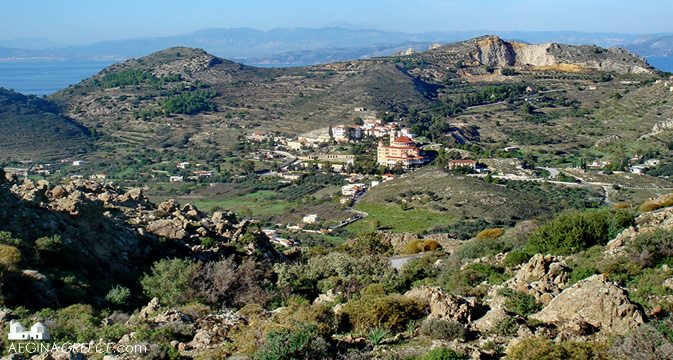 Interview with one of the sisters living in the monastery

A massive, recently-built church sits up on a hill in the inland area known as Kontos on Aegina island, just a few miles from the port. Built for the most recent Greek Orthodox saint – Agios Nektarios – it is visited by large numbers of people every year, many of them seeking help from this miracle-working saint, who died in 1920. Near the church is a complex of buildings which include chapels, a store selling icons, holy oil, candles, postcards and the like, the old house in which the holy man lived, and the monastery inhabited by a small community of nuns who tend to the spiritual needs of those who come to seek solace and healing.

I spoke with one of the “sisters”, who greeted me with such sweetness and answered my questions so graciously, that I was sure that those coming to unburden themselves must find in her much comfort. I asked her about the daily routine of the sisters, and learned that they rise at 4:00 – 4:30 in the morning, attend church services between 5:00 – 8:30, and that the doors to the church open at 5:30 am. At 8:30 they eat a small breakfast and then go about their various chores – called diakonima – works in the service of God), in kitchen, office, guest-house, vegetable garden, with the chickens and their two goats, whose milk they drink, speaking with/listening to those who come in pilgrimage to the church to seek help.

They eat their midday meal at 13:00, during which time they listen to readings of the words of “the fathers” (of saints and holy men of the church). During the mid-afternoon hours (mesimeri), they may rest if needed and if time allows, though always they must dedicate time to praying for those who have asked for help during the course of the day. The sister with whom I spoke stressed that there is much work to be done in the monastery, with some employed helpers to assist the nuns. During summer there is an ‘esperino’ service at 18:30-19:30 (esperino being the evening star). The evening meal is at 20:30, and the gates to the church also close at that time for the night.

I asked if the sisters who come to live and work in the monastery come there for life, and she seemed surprised by my question. “If you love God, there is no end,” she told me. New sisters are accepted, both young and old. “And how are your economic needs supported?” I asked her. She told me that the books, candles and icons sold in the little church store are their main means of support. “Donors have given the church money for large works,” she added, “and visitors sometimes bring us gifts of food. Once, a coach from Macedonia came and unloaded many crates of cherries for us!” 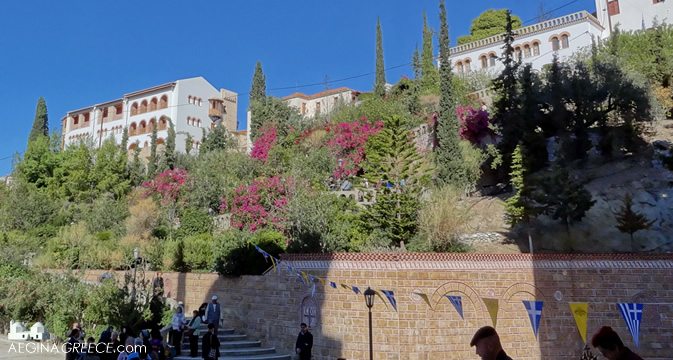 Lodging at the monastery

“Does the monastery provide lodging for guests?” I asked. “Only for one night, or sometimes for two for those who have come a long distance.” The procedure for requesting lodging is via FAX, the number: (+30) 22970 53998. One must state the number of guests seeking lodging and give a return FAX number. “We don’t accept money. We are a hospital of the soul,” I was told. “People come here to have us hear their pain.”

Find your accommodation on Aegina island

The church of Agios Nektarios supports her foundation known as Leousio Foundation “Agios Nekatrios” which provides daily meals to those in need (many of them elderly or disabled people), numbering 55 households, to whom the food is delivered from the “sisitio” kitchen. (I might add here that many local citizens provide the volunteer labour for preparation and delivery of these meals, with many ingredients donated by the local supermarket chain, Kritikos. There are also events held as benefits to support this admirable effort.)

I learned too that the church built the local hospital (of Agios Dionysios), and plans to turn the building where meals are prepared into a “gerokomio” (old people’s home). Trained sisters have served for periods of time as nurses in the hospital, and also as teachers for local children. A seaside campsite supervised by the church is located in the area called Tourlos, near Vagia. The church has restored also an old building in Aegina, which is a children’s center, for music lessons, games, and other activities. “But the church doesn’t involve itself in politics,” the sister added.

Those who wish to have icons and other items mailed to them from the church store can request such items via FAX and should include their address in the request. Holy oil & water is free, though books and other items require payment.

Unfortunately they are not working with email.